Last year I fell for the charms of E.A Bowles, plantsman and philanthropist (deceased), and a year later I find myself smitten with Gilbert White, plantsman, naturalist and philanthropist, who departed this life in 1793. I must start gathering some role models who are actually alive.

I hadn’t heard of Gilbert until recently, when I went to his house in Hampshire. It turns out he wrote one of the most widely published books of all time, The Natural History and Antiquities of Selborne. He’s often referred to as the first ever ecologist, and liked to observe wildlife that was actually alive, which was pretty unusual at the time (dead things were usually dissected instead).

He was a compulsive gardener too. No plan of the garden exists, but the head gardener has pieced it together by looking at journals, household accounts and a diary called the Garden Kalendar, in which Gilbert recorded all that he sowed and reaped. 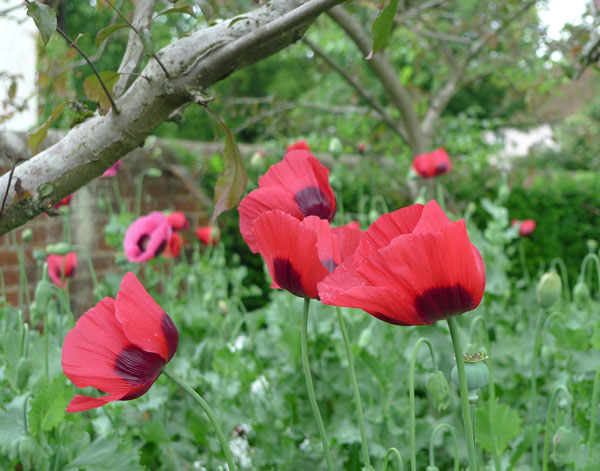 Against his south-facing Fruit Wall, Gilbert grew greengages, apricots, peaches, nectarines and grapes – crops we’d struggle to get a reliable harvest from today. And he was one of the first people to grow potatoes, which were pretty unusual at the time.

He also collected plants, and many of them were shown off in a garden of ‘six quarters’. These were six large flowerbeds that peak at different times of year: spring (snowdrops, aconites, Jerusalem sage and primroses), late spring (oriental poppies, goat’s rue and iris), early summer (Rosa gallica, viper’s bugloss), summer (everlasting peas and Arundo donax in one bed, Rosa mundi, tradescantia, eryngium and Rosa ‘Maiden’s Blush‘ in another – pictured at the top of this post) and early autumn (asters, sunflowers, hardy hibiscus and evening primrose). This year, acid-pink poppies had self seeded everywhere.

Gilbert also designed a wine-pipe seat, made out of an old port barrel. It could be turned in any direction to face the sun/shade and I can confirm that it keeps out the wind and rain perfectly.

He probably needed this seat for all weathers. According to his diaries, the weather in the 1700s was as bizarre as it is now. In one particular year it was freezing cold, followed by a drought, then a heatwave, then downpours. Sounds familiar… 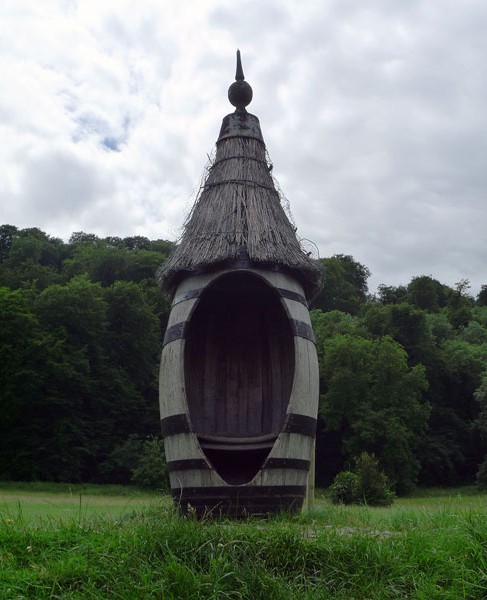