I’ve featured Danny’s garden quite a few times on this blog and it’s been much admired. Here’s his front garden in spring. He tells me that the tulips are: ‘Golden Apeldoorn’ (tall yellow), ‘Don Quichotte’ (single bright pink), Havran (burgundy), ‘Raspberry Ripple’ (white with raspberry red), ‘Evita’ (double white), ‘Camargue’ (tall, pale yellow with rosy streak) and ‘Blue Parrot’ (which haven’t come out yet). Plus some ‘Bowles Mauve’ wallflowers.

That’s quite a daring combination, but it works. Danny is one of those people who has a way with plants, and with a camera – he took these pics. And that’s just the tip of the iceberg as far as his talents are concerned.

Danny was recently informed that he had been awarded a ‘Silver Gilt’ in the Waltham Forest Best Kept Front Garden Award that he entered last year. That means his garden was in the top 12, but not in the top three. Standards are clearly exceedingly high in E17! 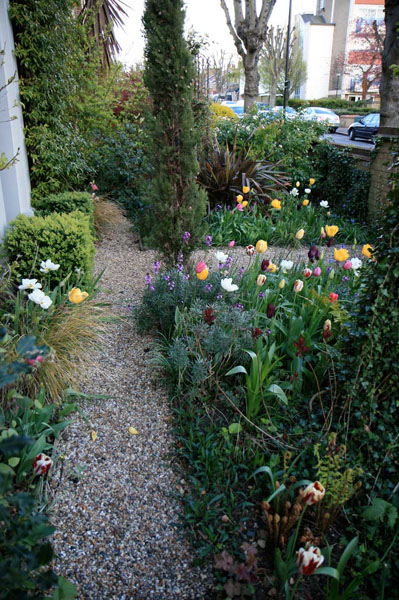