To be honest, I’ve never really got exhibition veg. Why would you go to extreme measures to grow an onion the size of a football or a parsnip that’s a couple of feet long? It seems like a very blokey thing to do – I’m not aware of any women who are into it. I’m more interested in growing tasty veg to eat.

But then I got talking to the twinkly Ray Bassett at the  RHS London Autumn Harvest Show. He’d won first prize for his French beans and second prize for runner beans in the Fruit and Vegetable competition and told me some of his secrets. To make the beans poker straight, he gently manipulates them into shape by hand. Once they’ve reached a certain size they grow straight all on their own, provided there’s nothing in the way. Ray said that ‘Stenner’ is the best and tastiest variety and promised to send me some seeds.

I didn’t like to point out that a couple of Ray’s beans seemed to be have been snapped in half, but apparently that’s all part of the judging. One judge calls out a number between 1 and 9, and then another calls left or right. And then a particular bean – say number three from the left – is snapped in half to test that it’s not stringy. Look closely at the pics and you’ll see the line where the beans were snapped.

Ray and I then had a lovely chat about love, life and gardening. Apparently his wife of 45 years likes horticulture too – she’s into the flower side of things. But it hasn’t always been that way – they used to be into TT racing and often say how surprised they are that they’ve ended up as gardening nuts. Ray says that life has never been better and he just wants to be in the garden all the time. And I can totally relate to that. 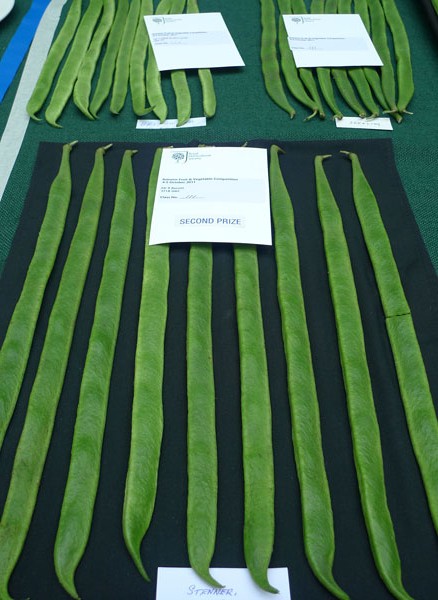