Along with a new house and garden, I have acquired a conservatory. Some people have been slightly derogatory about its plasticky look but I love it. On a sunny autumn day it gets distinctly toasty and there’s no nicer place to sit eating breakfast or working. On a dull day it gives a double hit of daylight and chlorophyll, without having to step outside.

The space only covers about 2.5m x 2.5m, but it’s a bottomless pit as far as plants are concerned. It already contains around 20 plants, but looks empty. The effect I’m going for is Andie MacDowell’s roof terrace in Green Card – so consider this the ‘before’ shot.

Needless to say, as with most conservatories, fluctuation in temperature is an issue. At the moment it’s about 10 degrees warmer inside than out, but as night falls, the temperature plummets. It’s still not as cold as outdoors, but it’s pretty chilly. I’m not planning on heating it – it costs enough to heat the rest of the house – so I’m making do with plants that can tolerate temperatures down to about 7 degrees. In effect, I am creating a winter garden.

So far, I’m overwintering a few plants for friends – two bananas, a fuchsia and a pelargonium. I’ve bought a lemon tree (Citrus x limon ‘Meyer’, which tolerates cooler temperatures), a camellia that should flower earlier as it’s under cover, and some succulents. Paperwhites, hyacinths and minature daffs are waiting in the wings and next spring I’ll start off some seeds in it. It will probably be largely emptied out for summer as it will get pretty hot, but next autumn I’ll bring in all the tender plants that I’ll no doubt have acquired by then.

So this time next year I should be giving Andie MacDowell run for her money. In the meantime the rays of sunshine and handy vantage points are being appreciated by my new four-legged friend… 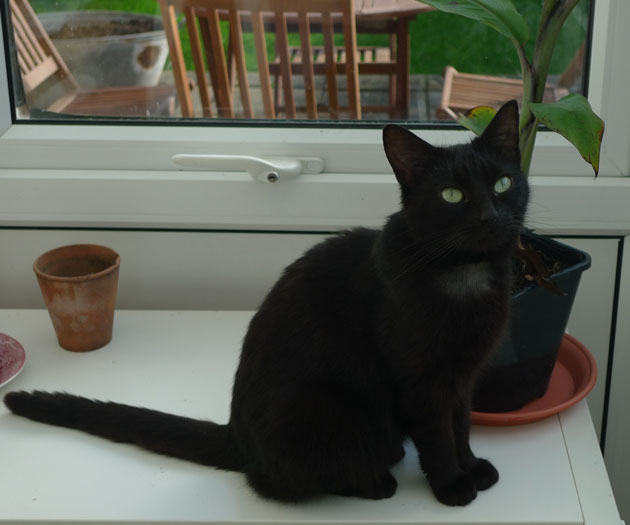 10 thoughts on “My conservatory”