‘If people don’t gasp when they turn the corner and see the border, I’m not doing my job properly,’ says Waterperry’s horticultural manager, Rob Jacobs. He needn’t worry – you couldn’t fail to emit all kinds of superlatives when you clap eyes on it for the first time, especially at the moment. Dozens of asters in shades of blue, purple and pink are at their peak, and several large Solidago ‘Golden Wings’ provide contrasting splashes of yellow. The colour palette reminded me of a bunch of statice.

The traditional herbaceous border was originally used for teaching – Waterperry started life as a horticultural college for women, under the stewardship of the formidable Beatrix Havergal. Each student took care of a section. The border was later unified by the legendary Pam Schwertdt (latterly the head gardener at Sissinghurst). It’s designed to have a long season of interest: lupins are the highlight in late May/early June, followed by delphiniums in late June/July, phlox in August and Michaelmas daisies (asters) in September. It looks so full and abundant that you can’t help wondering where the early flowerers have gone (a visitor once asked if the plants are removed and replaced for every season). Actually, it’s all down to careful positioning (and staking) – tall, early plants are situated at the back, and any plant that keeps its leaves nicely after flowering, or flowers late, is at the front.

The border needs a lot of work to keep it looking good. There’s a lot of staking and deadheading to be done, and in the first two weeks of November it’s all cut down to the ground. Rob and head gardener Pat are at pains to point out a couple of holes in the border and say that they’re never quite satisfied with it. But to anyone else, it looks pretty much perfect. 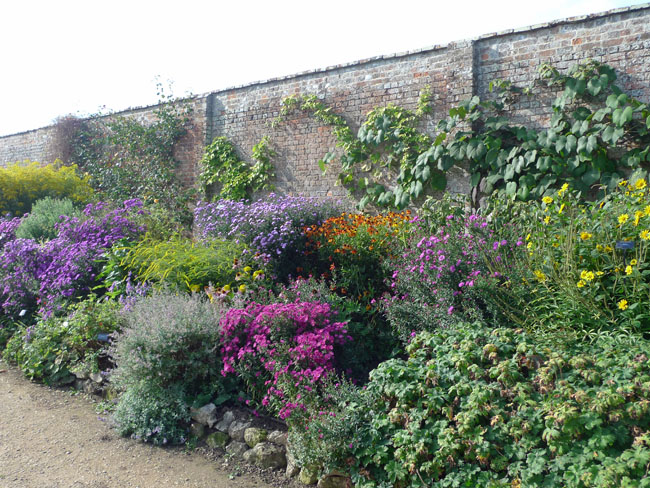