The French are much better at green walls than we are. There are a few in London – notably at the Athenaeum Hotel and at the O2 (and then there’s my favourite, inside Anthropologie) – but they haven’t really caught on. Paris, on the other hand, has lots, probably because the green wall pioneer, Patrick Blanc, was born there.

This green wall at the Fondation Cartier, created by Monsieur Blanc in 1998, is quite small – a few square metres – but it packs quite a punch. As well as lots evergreen perennials it contains some shrubs, including a giant Fatsia japonica. Apparently never been cut – a gardener just comes in a few times a year to remove any dead leaves.

The effect is slightly bonkers and a tad disconcerting – you  need to walk under it to get into the gallery, and those shrubs do stick out rather alarmingly. Plants do occasionally fall out of green walls – a few years back at the launch of the wall at the Athenaeum Hotel, a viburnum was dislodged by high winds and landed inches away from Tim Richardson, garden writer and founder of the Chelsea Fringe.

I read once that Jarvis Cocker dreams of shuffling off this mortal coil having being felled by a giant ‘G’ from a ‘Gaumont Cinema’ sign. Much as I like all things horticultural, I don’t really fancy meeting my maker courtesy of an earthbound Fatsia japonica. 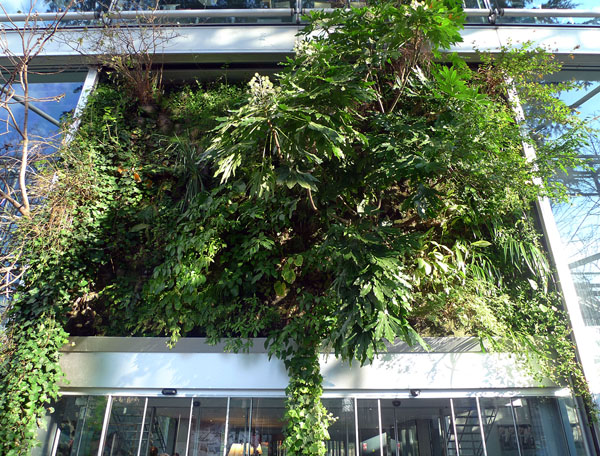