I took a trip out of London last week to the much-loved and respected Ashwood Nurseries in Staffordshire. I was there to meet the owner, John Massey, who has a beautiful three-acre private garden in the nursery grounds.

John’s garden looked so good it was almost enough to make me love January. Everything was about three weeks ahead, so my timing turned out to be perfect – the carpets of snowdrops, magenta cyclamen coum, yellow aconites and hellebores of every hue looked impossibly pretty among the yellow and red witch hazels (hamamelis) and red-stemmed dogwoods.

Sadly my camera couldn’t really do them justice (it’s got a rubbish zoom and I didn’t want to trample over John’s borders), but you can see some pics here. I did however manage to capture this border, in which most of the grasses and perennials have been left standing over the winter. 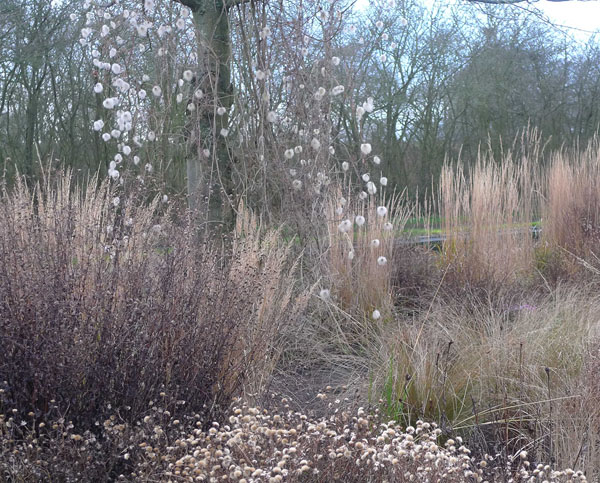 A big part of planting up a border is getting the right combination of contrasting forms and textures. The upright grasses contrast with the button-like heads of Aster ‘Little Carlow’, the coneshaped coneflowers (echinaceas) and the cotton-wool like seedheads of Clematis tangutica ‘Bill Mackenzie’.

John’s garden also makes use of evergreens, many of them clipped into distinctive shapes. His cloud-pruned holly hedge is Ilex aquifolium ‘Alaska’ – its small leaves lend themselves to being pruned in this way. 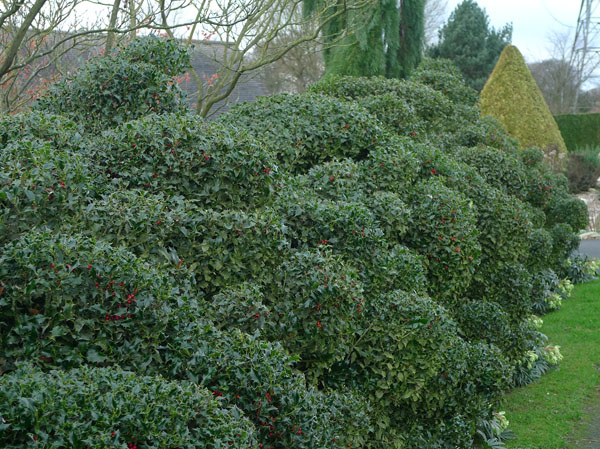 John’s garden is open to the public several times in January and February. Do go for some winter cheer, inspiration and the amazingly popular tearoom.