This weekend, I had a legitimate reason for ogling at other people’s front gardens. It was the E17 Art Trail and my friend Danny had transformed his road into the Street of Blue Plaques. He had trawled old census records to come up with a plaque for almost every house, commemorating an ordinary person who had previously lived there.

It was a simple yet brilliant idea which was great fun and also strangely affecting. In just 100 years, most of the jobs that people used to toil away at have ceased to exist: dairyman, for example, and fur cutter, and (my favourite) train ticket printer. Some people were working with materials I’m not familiar with, such as Xylonite and mica, and one chap built Britain’s first motorcar. In the spirit of the art trail, most houses in the street were sporting a plaque, and where a house had been bombed in the war, Danny hung a plaque on a nearby tree or railing. Those that weren’t claimed adorn Danny’s own windows (above). You can see them all here.

The art trail, of course, was also another chance to have another look at Danny’s garden. It was looking as lovely as ever, and there was a small gathering of garden aficionados out the back cooing at his imaginative plant combinations. The patio is surrounded by a trellis that’s draped in a large-leaved vine, Vitis cognetiae, and Clematis armandii. I would never have thought of putting a trellis in that spot as it obscures the view of the rest of the garden, or of covering it with such bold plants, but of course it all works brilliantly. 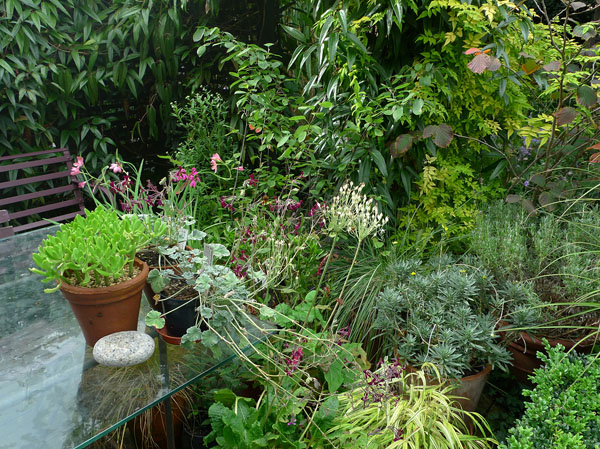 3 thoughts on “The street of blue plaques”