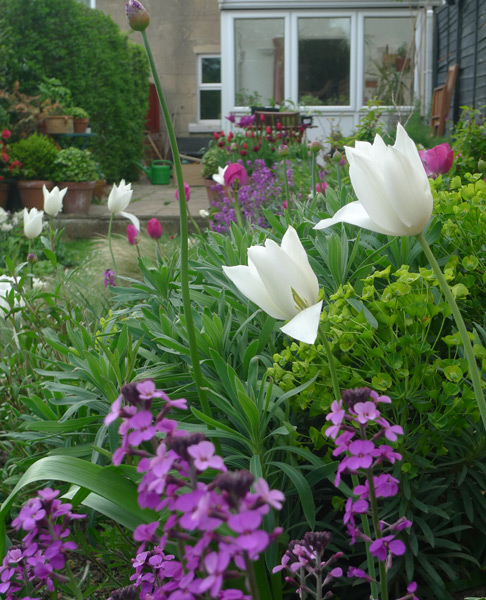 Whenever the weather forecast says it’s going to be windy, my heart sinks. ‘Windy’ means ‘gale force winds’ in my garden. It’s positioned in such a way that it gets the full force of south westerlies, and there’s nothing I can really do about it, as I’ve explained before. All I can do is plant wind-resistant plants such as Erysimum ‘Bowles’s Mauve’ and grasses, and try not to look out of the window while violent gusts toss my precious plants about.

So hats off to the two tulips you can see here, ‘White Triumphator’ and ‘Attila’s Graffiti’, which have endured two days and nights of very strong winds. Some lost their petals, but the stems on all of them stood firm. ‘White Triumphator’ in particular looks almost as good as they did before the windy weather.

I saw ‘White Triumphator’ tulips at the Walled Garden at Mells last spring and loved them as they looked so classy. I chose ‘Attila’s Graffiti’ because they’re ‘Triumph’ tulips, said to stand up to bad weather. I’ve been really pleased with them, too – the flowers have been huge and have flowered for ages, and they contrast really well with the acid yellow flowers of Euphorbia characias subsp. wulfennii and the purple erysimums. I’m defnitely going to grow more Triumph varieties next year.

The same can’t be said of ‘Prinses Irene’ in pots in the front garden – they’ve all been decapitated.