I used to live in a building called Utopia House. Never was a block of flats more inaccurately named, but that’s another story. One thing that used to fascinate me was that out of 18 flats, only two had plants on the balconies. The rest were home to junk that people didn’t have room for indoors. Space was at a premium, of course (why can’t designers create flats with enough storage – basements, bike stores etc?), but I got a lot of pleasure from gazing out at my green jungle. I couldn’t understand why 16 households in a fairly grim part of town were looking out on such a depressing view.

At the weekend I walked past the Alexandra & Ainsworth Estate and decided to have a look around. Whenever I’ve gone past it on the bus I’ve thought it looked like it must be home to some greenfingered residents, and so it is.

This was the best bit of planting I saw (I especially like the celebratory flags) but I also spotted lots of red geraniums (the perfect balcony plant as they’re so visible), lavender, courgettes, salads, garden gnomes and even trees in pots. Apparently the architect, Neave Brown, designed the site so that everyone had access to a private outdoor space of some kind. And 30-odd years later it’s obviously still appreciated, as most people seemed to be growing something.

I also spotted a community veg garden (growing in bags). And apparently the site will soon be getting some beehives, too. 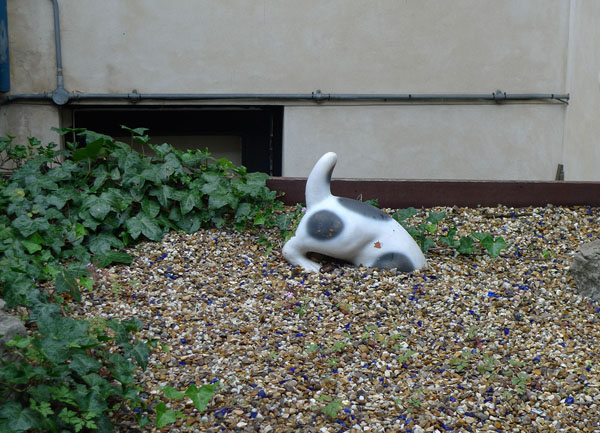 2 thoughts on “The Alexandra & Ainsworth Estate”