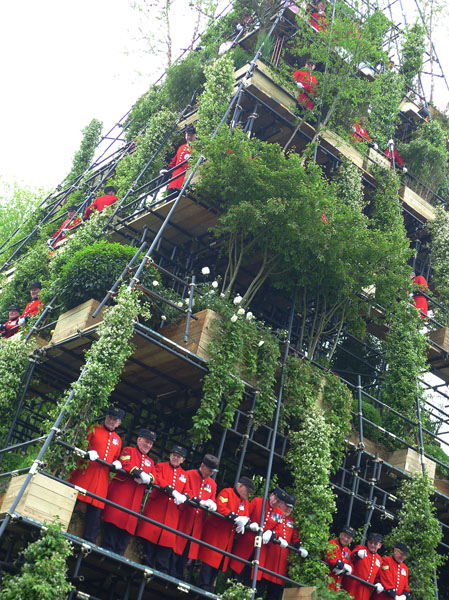 Unless you’ve been living in a cupboard under the stairs, you’ll know that the Chelsea Flower Show is taking place at the moment. I went on Monday, on press day. It’s a privilege to walk into the  showground early in the morning, the air heady with anticipation, and to glimpse the show gardens for the first time. I’ll admit that I’m more interested in the show gardens than I am in the displays in the Great Pavilion. Maybe that will change when I get my own garden, as I might actually be in the market for buying some plants.

This year, the must-have plant seemed to be cow parsley. A colleague quipped that he spends most of his life trying to keep it out of his garden. There was a very high box ball and topiary quota, too. Some of the big gardens on the Main Avenue looked a tad similar, with lots of naturalistic, romantic planting – a reaction to the double-dip recession maybe? Or a homage to the big Chelsea cheese and gold medal winner Tom Stuart-Smith? And oddly, there was very little grow-your-own in comparison to the last few years, so maybe that bubble is beginning to burst.

This year, I decided I’d ‘judge’ the gardens on whether I’d like to wake up looking at them every day. My favourites are below. I wouldn’t actually want Diarmuid Gavin’s creation (above) outside my back door, but it was most definitely fun. Due to vertigo issues I only got halfway up, but it was great being able to set foot in a show garden, especially one that involved ladders, waterfalls and slides.

And then, of course, there were the celebrities. I’ve come to the conclusion that spotting celebs on press day at Chelsea is a bit like going on safari. On safari you’re told what you might see – zebras, lions, elephants etc – and you really, really want to tick them off your list. At Chelsea, you’re given a list of the celebrities who may be present (Christopher Biggins, Floella Benjamin and Ringo Starr are usually guaranteed), and you really, really want to tick them off the list. You get jealous if someone has seen someone you haven’t, even if they’re a bit Z-list, and get over excited if you spot anyone at all (my colleague Jane, visiting Chelsea for the first time, cried: ‘Oh my god, it’s JENNIE BOND!!!!’. We haven’t let her live that one down).

If you get wind of a crowd gathering, see some flashbulbs going off, or hear a rumour that someone off the telly is nearby, you hotfoot it there indecently quickly, camera or smartphone held aloft and sharp elbows at the ready. This is what happened when I heard Gwyneth Paltrow was in the vicinity last year, and the same thing happened this year with Sir Cliff Richard. I’m not proud of it and I don’t know why I did it, but there’s a pic of him at the bottom of this post anyway.

There was a lot going on in Joe Swift’s garden compared to others on the Main Avenue, but it was ordered, welcoming, contemporary and considered. I’d seen some drawings beforehand and the garden didn’t look particularly inspiring, so the finished result was a surprise. All the years commenting on other people’s show gardens for the BBC have obviously paid off.

I sat on Cleve’s bench for a few moments with a bunch of other hacks. I loved the planting  – naturalistic but with lots of pops of colour. Apparently there was some red, white and blue to commemorate the Queen’s Diamond Jubilee, but it was very subtle.

Jo Thompson’s garden was an inspiration for anyone with a small space. She used mature birch trees, Betula albosinensis  ‘Fascination’, which were perfectly shaped and not remotely overpowering – perfect for a town garden. And who wouldn’t want Doris (the 1950s caravan) at the bottom of their garden?

More inspiration for small gardens. The clever layout included a path that was a continuous curve, leading to a seat. The sweep of alpine strawberries (on the right) was a nice touch.

This Japanese masterpiece invited you to just stand and gaze at it. Which I did, for a long time.

Lots of hard landscaping and tree ferns isn’t really my thing, but the underplanting was really pretty in this garden, in shades of purple and orange. I couldn’t really do it justice in this pic.