‘I don’t think there’s much to see there,’ said the taxi driver when he dropped me off at Longstock Park Water Garden. That proved to be something of an understatement.

The International Water Lily Society once called Longstock Park the ‘finest water garden in the world’ and I’d go along with that. Two and a half acres of lake, fed by the River Test, are interspersed with islands linked by little wooden bridges. The garden is expertly planted with aquatic and moisture loving plants and it’s immaculate: the entire garden is weeded once a week and two and a half miles worth of lawn edging is perfectly clipped. The hostas are entirely untouched by slugs, thanks to the ducks who munch on their eggs.

On a rainy day, the garden was overwhelmingly green thanks to the lawns and lush new growth, set to explode into colour any day now. It was also incredibly tranquil. For a few minutes I sat in the thatched summerhouse, watching the rain falling softly into the lake and ignoring my phone, which was gently beeping at me.

On the train back, I read that John Spedan Lewis (of John Lewis fame – the garden is owned by the John Lewis Partnership) had a phone installed in the summerhouse so that he could work there and enjoy the view. If he was still around today he would no doubt be sitting there with his Blackberry. 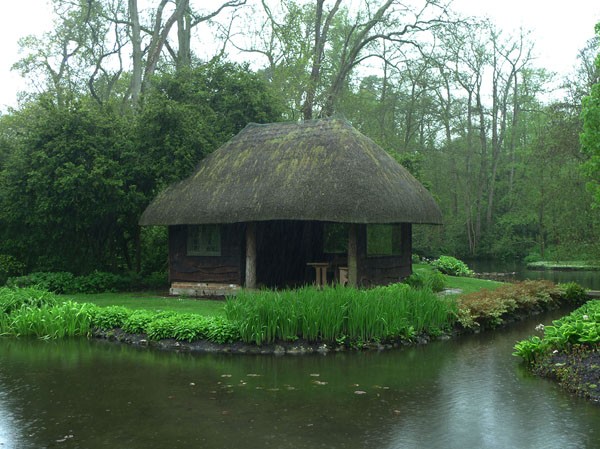