Here’s the second of my ‘before and after’ posts – this time the Oranges & Lemons Garden in Shoreditch. I helped oversee the garden for the Chelsea Fringe.

This was an ambitious project: it’s a big site in a churchyard in gritty, trendy Shoreditch that’s surrounded by busy roads, shaded by large trees and covered in concrete. Plus, there was no sponsor and therefore, no money. But that didn’t stop the designer, Dan Shea, pulling off a garden that’s been a roaring success and a highlight of the Fringe. 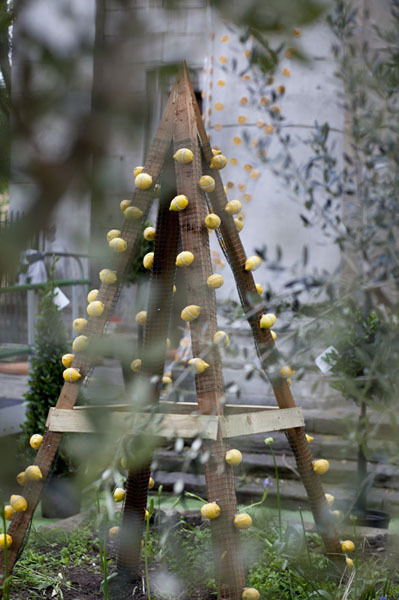 Dan was going to clad the pillars in real oranges and lemons, but in the end he sliced them and dried them in his  oven, put them between clear tape and hung them: a neat solution. Real lemons were attached to obelisks that he placed in four raised beds (put in place by the Shoreditch Sisters). Dan bought fake turf from RightStep Grass and got hold of some deckchairs from Tropicana. Gorgeous mature olives, citrus trees and shrubs were loaned by Clifton Nurseries.

Dan says that people have been coming to the garden in droves. On a hot day, in an area that’s short on green space, it has proved a big draw – it has a mix of sun and shade and provides somewhere to sit. Dan had a flash of inspiration and turned his leftover lemons (he’d bought 1000) into fresh lemonade, which went down a treat during the hot weekend we’ve just had. A bookseller from Occupy has been selling books for £1 and leaving them dotted around the place for people to read, and Dan has been playing reggae music from his girlfriend’s stereo – this has helped to entice people in and has drowned out the traffic noise.

And in a somewhat bizarre turn of events, the garden was visited on Wednesday by the Duchess of Cornwall. She’d heard about the Fringe and expressed an interest in visiting some of the gardens in the East End. She visited Spitalfields City Farm, the Dalston Eastern Curve, the Geffrye Museum, the Oranges & Lemons garden, and a pothole. I’m no royalist, but it was a lovely, celebratory occasion – she met some gardeners from the Hanbury Project and some local schoolkids (who sang Oranges & Lemons) and everyone who had taken part. She seemed genuinely interested and chatted to everyone.

The Oranges & Lemons garden encapsulates what the Fringe is about – it’s original, fun, has brought greenery to an urban space, and has given pleasure to a lot of people. I look forward to see what Dan comes up with next year. In the meantime, he’s now  concentrating on a garden he’s creating for the Hampton Court Flower Show in July...

1 thought on “The Oranges & Lemons Garden – with royal approval!”